“America’s problem isn’t too much religion, or too little of it. It’s bad religion.” So opines New York Times columnist Ross Douthat in his new book Bad Religion, which in my humble opinion is the best read of 2012 thus far. 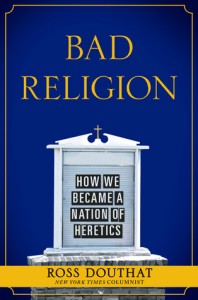 Douthat advances a compelling thesis that challenges both “liberal” and “conservative” views of cultural malaise. He asserts that America has been overrun with heretical versions of Christianity, and that these subtly influential heresies – not traditional, orthodox Christianity –have weakened our cultural heritage. From the Preface:

[There are] two… popular explanations for America’s current predicament – one offered by the Christian right, and the other by the secular left. The [right] holds that Americans have lost their way because they’ve fallen away from the faith of their fathers… Their prescription, from the 1970s to the present day, has been a religious counterrevolution, aimed at restoring faith to its rightful place at the center of American culture… [By contrast, the left insists] that the United States is in decline because it’s excessively religious… [But] both sides have embraced a wildly simplified version of our culture… Today’s United States needs to be recognized for what it really is: not a Christian country, but a nation of heretics.

Douthat’s thesis obviously should provoke interest from orthodox Christians who are used to being co-opted into the culture war (by the right) or else blamed for it (by the left). Apart from the book’s content, there are two reasons it is an important tome for evangelicals. First, Douthat is a respected New York Times columnist, which means his arguments will likely gain a hearing from skeptics. Indeed, the reception he’s received from critics like Bill Maher – and his winsome affability in such contexts – suggests that he’s found a voice in the broader cultural dialogue. Your agnostic friends may not consider James Dobson or Chuck Colson to be credible sources, but they’ll likely lend Douthat a more favorable ear. Second, he’s a conservative Roman Catholic, which means he’s writing from outside our “tribe” (evangelicalism) but from within our broader family (the historic Christian tradition). His keen assessments of our strengths and weaknesses are both pleasant and challenging. And readers who have met only go-through-the-motions, Christmas-and-Easter Catholics will be surprised (perhaps even confounded) by Douthat’s intellectual and spiritual vitality.

Bad Religion is part history lesson, part sociological analysis, and part apologetic – and it excels in all three categories. The first section of the book reviews the history of American Christianity in the twentieth century. As a journalist, Douthat excels in his ability to offer both substance and summary. Readers who engage these three chapters will have a grasp of contemporary church history that exceeds the average seminary student’s. It’s all there – fundamentalism vs. modernism, Vatican II, liberation theology, civil rights, Barth and Niebuhr and Billy Graham and Francis Schaeffer, Moral Majority and Humanae Vitae – and yet it’s there in a clear, concise, accessible package. Reading these chapters is one of the best investments thoughtful Christians can make to understand their own history and comprehend the massive religio-cultural shifts of recent years.

The second section of the book is devoted to heresy – specifically, three pseudo-Christianities that dominate our cultural landscape: the prosperity gospel of Joel Osteen, the “God within” theology of Elizabeth Gilbert and Oprah Winfrey, and the “God-Bless-the-USA” nationalism of Glenn Beck. Douthat is at his best here, grounding his analysis in solid facts and showing how these heresies often masquerade as heirs to the historic Christian faith. Though his critiques are often theological, his broader concern is cultural: “All of [these heresies] exert a profound, and often profoundly negative, influence on our American society – on our intellectuals and our popular culture, our bedrooms and our boardrooms, the Democratic left and the Republican right alike.” By showing how bad religion affects our entire society in a negative way, Douthat hopes that his work will be “compelling even to readers who are unconvinced that Jesus of Nazareth was resurrected from the dead.”

The final chapter is an apologetic for the recovery of Christianity. Douthat’s prescriptions here, though not novel, will encourage orthodox Christians to persist in seeking theological, personal, and social renewal. “To hope for revival is every believer’s obligation,” writes Douthat, and “a more robust and rigorous American Christianity is something that even nonbelievers should consider hoping for as well.” He points to Tim Keller and Doug Wilson as two intellectually vibrant Christian leaders who inspire hope for such a revival, and he speaks positively of “a robust Calvinism” that is ecumenical yet confessional.

The book isn’t flawless: astute readers may disagree with some of Douthat’s assessments, and historians may lament his over-simplified categorizations. But it’s still the strongest book of the year thus far. Equipping Christians to interact thoughtfully with culture is one of the most pressing issues of discipleship and mission in our day. And a well-written book that helps Christians understand their history, think critically about modern heresy, and defend the faith in a skeptical world is a welcome tool.

Get Bad Religion. You won’t be disappointed.